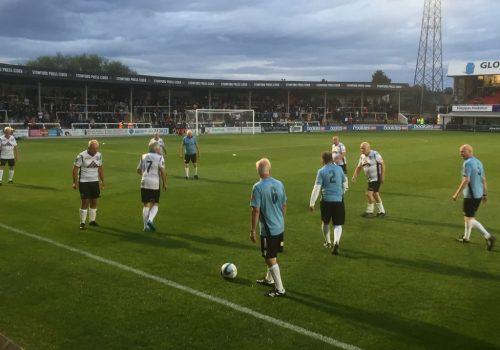 Following the winding up of Hereford United on 19th December 2014, the Hereford United Supporters Trust (HUST) vowed to start a new phoenix club. Three days later, local businessman Jon Hale, who had earlier been chairman of HUST, registered the name Hereford Football Club with the Herefordshire County Football Association, in conjunction with the trust and a group of local businessmen. Nicknamed The Whites or The Bulls, the club’s ground has a capacity of 5,213.

Engineers from PTSG Building Access Specialists Ltd carried out an inspection of the four floodlight towers at the stadium. They used the fixed access points to safely access the towers with ropes. Abseiling is widely recognised as the safest and most effective method for accessing tall structures. It allows engineers to easily move vertically as well as horizontally, with minimal time spent assembling and disassembling equipment.