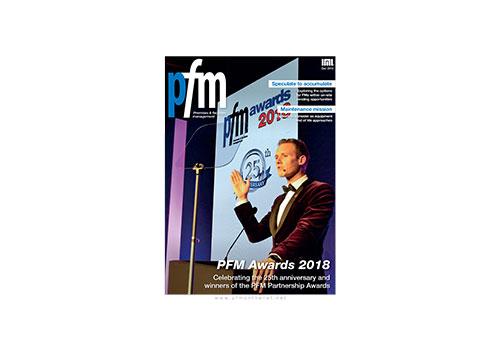 The latest issue of PFM reports on the PFM Partnership Awards that were held in a ceremony at The Brewery in London on 7th November. It was the 25th anniversary celebration of the awards and PTSG was proud to take centre-stage twice: as the winner of the award for Partners in Corporate – Private sector, for the partnership between London cradles division Integral Cradles and Skanska; and as the winner of the award for Achievement in Facilities Technology for its proprietary software, Clarity.

PTSG’s CEO Paul Teasdale commented: “It is a privilege to be a double winner at this year’s Partnership Awards and to be featured in the December issue of PFM magazine alongside many of the industry’s leading names.

“PTSG has already featured in PFM magazine on three previous occasions this year – focusing on the work that we do to safeguard buildings and their users in the event of a fire, and our unwavering approach to protecting the health and safety of everyone involved in our projects. 2018 has been hugely successful for the Group and it is always very gratifying to be recognised in respected trade publications such as PFM. We are now looking forward to the opportunities that lie ahead in 2019.”