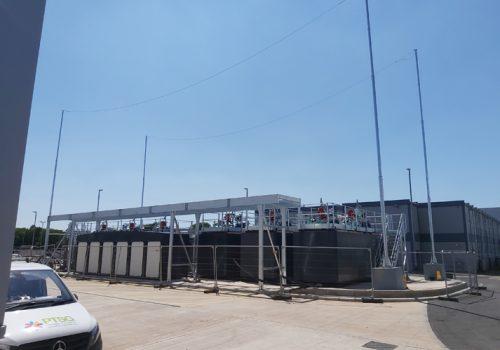 The work of PTSG’s specialists from its Electrical Services division involved four 15-metre masts and catenary cables linking the masts together. They also fitted copper tapes and earths at ground level to ensure that, overall, the fuel farm is safe from lightning.

Both marques have long and complex histories prior to their merger – Jaguar going back to the 1930s and Land Rover to the 1940s – first coming together in 1968 as part of the British Leyland conglomerate, later again independent of each other, and then as subsidiaries of BMW (in the case of Land Rover), and Ford Motor Company (Jaguar). Ford acquired Land Rover from BMW in 2000 following the break-up of the former Rover Group, which was effectively the remainder of the British Leyland car producing companies.

PTSG has previously worked successfully with Jaguar Land Rover. In December 2018 the specialist services provider completed work at ‘Project Triangle’, named after the shape of the site in Gaydon. The development is one of the world’s foremost automotive product, engineering and design sites. Lang O’Rourke developed the site to create a unique landscaped campus comprising new offices and the Jaguar and Land Rover design centres. Lang O’Rourke and Crown House contracted PTSG to provide electrical services.