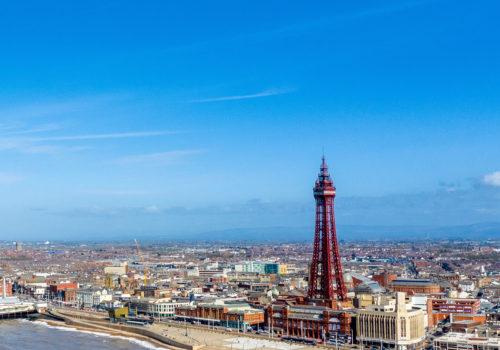 A world-famous, hugely popular tourist attraction, Blackpool Tower is visited by around 650,000 people every year. In 2018, Blackpool Council announced an open tender process to appoint a suitably experienced contractor to carry out at-height external structural repairs to the tower, followed by ongoing planned maintenance.

The tower’s design is widely acknowledged as being ahead of its time. As a writer for the BBC noted: “In heavy winds the building will gently sway; what a magnificent Victorian engineering masterpiece.” It is the only Grade I listed building in Blackpool.

Pendrich Height Services Ltd, part of Premier Technical Services Group PLC (PTSG), was appointed as the main contractor after scoring highly in the tender process. Pendrich is a tall buildings specialist, with nearly half a century of experience. The company has diversified its service offering from traditional cloth caps and steeplejack techniques into a modern, high-tech engineering company, providing height work solutions to a vast array of structures.

Based in Edinburgh but operating all over the UK, Pendrich has become a critical part of PTSG’s Building Access Specialist Ltd division since its acquisition by the Group in 2015. On this project at Blackpool Tower, the team has formed a close working relationship with Merlin, which operates the tower on behalf of the council.

The contract between PTSG Building Access Specialists Ltd (Pendrich) and Blackpool Council is in two parts: Phase I was to perform vital structural repairs over a period of three months, beginning in January 2019 with completion at the end of March. Restoring one of the nation’s favourite tourist attractions There were two main elements to the repair work. The first was the replacement and renewal of structural steelwork at the base of the tower. This involved closing the tower to for periods of time to the visiting public high-level reparations took place.

This was the first time some of the tower’s steel had been renewed or replaced, and crucial sections had corroded over its 125-year life span. During the three-month package of repairs, PTSG’s team towards the end of Phase I was on site 24 hours a day for a full week to ensure crucial deadlines were being met with and that the works were carried out un-interrupted due to the significance of the work to the overall structural integrity of the tower. PTSG is acting as the main contractor under the CDM Regulations.

The second major part of the Phase I was the replacement of a concrete floor at 380 feet up the tower. PTSG’s engineers first demolished and removed the existing concrete floor before installing new steel supports and finally laying the new section of concrete. This element of works was highly safety-critical as the lifts were out of commission due to the works carried out in the lift pit area by PTSG. This meant that the team had to install a temporary cradle system to transport men and material to the 380-feet deck level. This put a strain on the overall time required to complete the job; however, PTSG injected extra manpower to ensure that the deadline for the project completion was not compromised.

Phase II of the contract between PTSG Building Access Specialists Ltd (Pendrich) and Blackpool Council is to provide ongoing maintenance work for up to four years, with the contract being renewed after each one-year period.

“This was the first time some of the tower’s steel had been renewed or replaced, and crucial sections had corroded over its 125-year life span.”

Phase II of the contract has dovetailed with the first, with engineers already beginning the most urgent maintenance work. PTSG Building Access Specialists Ltd. has drawn up a schedule of maintenance work for 2019.

The Phase II of the project will involve:

All the above works are planned for 2019. Looking ahead, PTSG’s engineers will be working to replace part of one of the tower’s two lift shafts in 2020. The tower’s two lifts go to a floor 17m above ground. From there, the lifts carry passengers to an observation platform 146m up. The lifts were originally designed to be operated by gas engines, each with two cylinders. The engines have since been replaced by electric motors.

PTSG Building Access Specialists (Pendrich) and The Blackpool Council have in a very short period of time built a strong partnership where constant communication is ongoing with regard to the programme of works and priorities of repairs to be carried out. The Council, Merlin and ARUP have shown great confidence in PTSG’s management and engineers alike and put their trust into future maintenance works.