Engineers from PTSG Fire Solutions Ltd have already delivered servicing and testing packages for dry risers, sprinkler systems and fire extinguishers at a large number of sites throughout the UK. This will continue at further sites in different locations, underlining the retirement living provider as a major client.

PTSG is dedicated to making buildings safe and efficient for users via a wide number of specialist services. PTSG Fire Solutions Ltd – one of four discrete business divisions within the Group – undertakes a huge amount of work in the residential sector, delivering services which ultimately give people valuable peace of mind in their homes.

Our ability of providing multiple specialist service at the same site(s) means we can often deliver a full-service solution for our customers. This increases efficiency all round in terms of time, work and money. Below are some of PTSG’s bundled services contracts for 2019.

We are proud to present a short summary of three of our more high-profile projects, which were started before 2019 but work continued on each one during the year.

In November 2018 PTSG received the top prize at the PFM Partnership Awards for ‘Partners in Corporate – Private Sector’, for the design and installation of a huge and innovative cradle system on behalf of Skanska which is located at the pinnacle of The Scalpel in central London.

Work continued in 2019 as PTSG (via constituent company Integral Cradles) assisted with the final clean of the iconic skyscraper, before handing over to the client.

The Scalpel is 190 metres tall, offers 35 levels of office space, over 500,000 square feet of commercial space and over 12,000 square feet of retail and restaurant space. The Group’s London-based Access & Safety team designed and installed two building maintenance units (BMUs)at the new structure – two of the world’s largest, in fact. Their specialists also created a series of intricate moving roofs in which to house the BMUs.

The Scalpel takes its place in the city alongside The Gherkin and The Cheesegrater, contributing to one of the most recognised skylines in the world. Both of these buildings also benefit from access solutions designed and installed by PTSG’s London-based Access & Safety team. 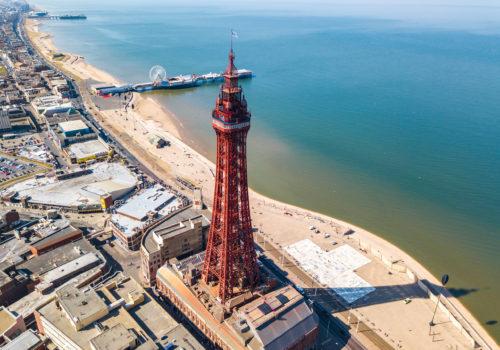 In 2018, Blackpool Council announced an open tender process to appoint a suitably experienced contractor to carry out external structural repairs to the tower, followed by ongoing planned maintenance.

Pendrich Height Services Ltd, part of Premier Technical Services Group PLC (PTSG), was appointed as the main contractor, after scoring highly in the tender process. Beginning in January 2019, its specialists began Phase 1, which was the renewal and replacement of structural steelwork at the base of the tower.

The package of works was completed on time and to budget at the end of March, with the engineering team overcoming the significant challenges surrounding the location of the tower and the safe delivery of new material and equipment to the top levels.

The project was runner up at the PFM Partnership Awards 2019 (Partners in Renovation award). 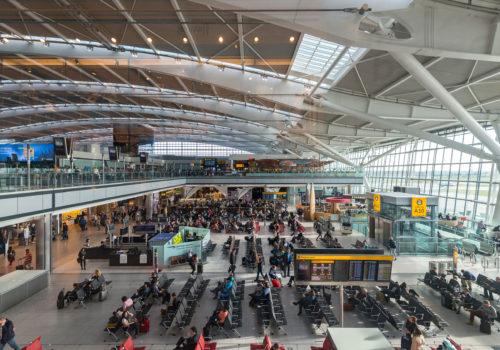 In 2011 there was no individual or company working on safety systems at Heathrow Airport. Trinity Fire & Security Systems (Trinity), one of PTSG’s constituent companies, created “Team Heathrow” to fill this considerable gap and become a seamless extension of the Heathrow team.

Not only did Team Heathrow clear all legacy faults across Terminals 1 and 3, it went beyond the contract in submitting a dilapidation report, highlighting any areas of the assets the team maintained that were faulty or had not been maintained satisfactorily prior to the contract.

On the back of the dilapidation report, a risk register was created to highlight the risks outstanding in the system, so they could be added to Heathrow Airport’s own risk register, which is evaluated by the engineering committee every six months. This ultimately gave Heathrow a guide to where they needed to invest money in the coming years.

In 2015, Trinity won the renewal of the Heathrow maintenance contract in 2015 – the largest in the company’s history. The contract runs until 2021 with a two-year extension option.

Since 2015, Adam Davies, as Technical Director on the Heathrow account, has taken technical direction and leadership across the business, setting and managing strategic targets and developing Trinity’s technical offerings and managing the business’s product selection. This work culminated in Adam winning Account Director of the Year at the 2019 PFM Partnership Awards.

Kew Bridge is a new luxury residential development in West London, situated on a picturesque stretch of the Thames opposite the world-renowned Royal Botanic Gardens. Apartments benefit from 24-hour concierge, fitness suite and private car park. Prices range from £500,000 to £3 million.

PTSG Fire Solutions Ltd, working for contractor MEB Building Services, will deliver commercial and residential sprinklers throughout the building, with construction running until 2022.

The Christmas Jumper Day, now a permanent fixture in the diary for a great many organisations large and small and the Christmas Fuddle (taking place on 20th December) combined to raise nearly £150.

All participants chose a charity for funds to be put towards. Nominations were put into a hat and the two drawn at random were:

• Yorkshire Air Ambulance
• Save the Children

The funds will be split evenly between the two. 2019 has been a busy year for PTSG’s 1,200+ staff, who raised money for various charities. Some of the notable events are:

ESOS, the Energy Savings Opportunity Scheme, was introduced by the Government to promote energy efficiency. Compliance is required by larger organisations with 250 or more employees to ensure they are regularly assessing their energy usage every four years and, most importantly, to highlight energy savings opportunities as a mandatory practice.

Trinity Fire & Security Systems (Trinity) was acquired by PTSG in January 2019. Not only did this give PTSG a fully comprehensive range of specialist fire solutions, it also confirmed PTSG Fire Solutions Ltd as the fastest-growing division of the Group. Trinity operates from ten regional offices, part of the Group’s total of 29 UK offices.

Certification puts PTSG in a leading position regarding compliance; the Group has well over 130 individual accreditations across its four business divisions. The ESOS Phase 2 certificate will see 90% of energy consumed by Trinity accounted for across all sites, including transport.

The ESOS Assessments were a major undertaking, reviewed and signed off by a board-level director and approved by a lead assessor before being reported to the Environment Agency.

Premier Technical Services Group Ltd (PTSG) is delighted to have been named the 2020 winner of the Service Excellence Award – UK, in the Corporate LiveWire Innovation & Excellence Awards 2020.

Companies are nominated each year by readers and contributors to the Corporate LiveWire and LTG publications, and a panel of judges selects a winner in a number of different areas. This is the third year running that PTSG has won the award for service excellence. Delivering excellent service has always been PTSG’s priority above all else. The achievement of a contract renewal rate in excess of 88% is one of the Group’s proudest achievements and speaks of the satisfaction amongst its customers.

This is the latest in a successful run of awards for the Group. In November, Adam Davies from PTSG Fire Solutions Ltd won Account Director of the Year at the prestigious PFM Partnership Awards on 6th November for his work at Heathrow Airport.

Also last month, PTSG won Deal of the Year (£25m and above) at the Insider Yorkshire Dealmakers Awards 2019. It recognises the landmark agreement reached in June between the Group’s Board of Directors and Macquarie Principal Finance, which has given PTSG even greater financial strength and market potential. This is the biggest deal of its kind this year.

The article is entitled ‘No Slowing Down for PTSG’, which comes after the milestone agreement earlier this year for the Group’s acquisition by Macquarie Group’s Ltd.’s Principal Finance business (Macquarie) for more than £300 million.

In a frank and open exchange with Brian Shillibeer, Mr Teasdale described PTSG’s journey over the past 12 years and alluded to the factors that are behind the company’s success. One factor that came through loud and clear was passion – passion for the FM sector and the desire to offer something genuinely new.

PTSG has experienced rapid growth and achieved a significant share of the markets in which it operates in a relatively short time. Compliance is one of the main areas of business for the Group. Mr Teasdale talked about PTSG’s good relationship with the larger FM companies and how they complement each other, doing things the other can’t or doesn’t want to do.

As for acquisitions, he was clear that PTSG doesn’t buy businesses to solve problems. The Group’s strategic acquisitions policy is about enhancing its business, taking the company into new niche markets and expanding its geographical coverage. PTSG can also help certain companies with their own growth curve.

Engineers from PTSG Electrical Services Ltd are back on site in Staffordshire, near the village of Alton, to upgrade the existing lightning protection systems and add further protection. Work will take place over the winter period.

In 2017, Alton Towers Resort was the second most visited theme park in the UK after Legoland Windsor. The park operates a total of ten roller coasters and offers a range of accommodation and lodging options alongside the theme park. Facilities include Alton Towers Waterpark, conference facilities, a crazy golf course, and a high ropes course. Whilst the theme park is closed during winter, many of its hotels and amenities are open all year round.

The number of lightning protection projects PTSG is contracted for through it’s electrical services division continues to grow in breadth and depth. Sites vary from historic or protected buildings, such as Leeds’ Grade I-listed Leeming building and Berrington Hall in Herefordshire, to iconic buildings including Battersea Power stations, as well as a vast number of buildings in the higher education sector.

The contract is with London-based property developer, Mount Anvil – PTSG’s largest project to date with the company. It is also a project of considerable complexity.

Engineers from PTSG Access & Safety Ltd will install a bespoke walkway/ManSafe system at the development, called Three Waters, which is comprised of three new buildings rising above the River Lea, Bow Creek and the Limehouse Cut.

The architecture is designed to reflect the industrial heritage of this conservation area, where red brick façades and pitched roofs were a common part of the historic wharves and warehouses in this area of east London. Mount Anvil’s previous projects include the redevelopment of Riverside Studios in Hammersmith and the 36-storey, 116m Lexicon Tower in Islington.

PTSG’s London portfolio – particularly that of its Access & Safety division – is growing rapidly and represents a significant part of the emerging new skyline in the capital.