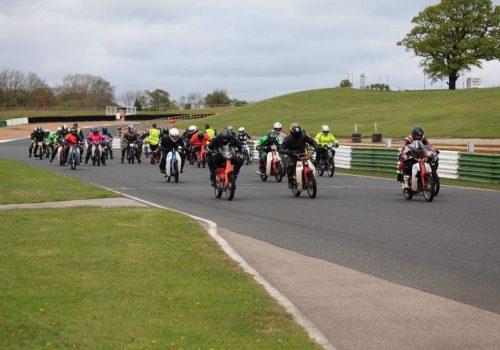 Premier Technical Services Group PLC (PTSG) has continued its commitment to charitable events with its participation in the Mallory 100 Plop Enduro 2019.

350 riders took part, with teams of four taking turns to ride a Honda C90 during the eight-hour endurance race. Such is the popularity of the Plop Enduro that it attracts some of the UK’s top riders, with the likes of regular competitor and British Superbike (BSB) race winner Richard Cooper and World Supersport and BSB rider Kyle Eyde taking part this year.

PTSG’s Mark Brackenbury, Group SHE Advisor, cut short his holiday in order to take part in the race on Saturday 27th April, which began in heavy rain. Without suitable tyres for such conditions and being one rider down (who failed to turn up), things weren’t looking good. To add to the team’s troubles, the exhaust studs on the Honda C90 sheared at around 11am. Just before lunch, the front wheel bearings had collapsed. However, the front wheel was swapped, the chain tightened and, following a one-hour lunch, Mark’s team got back onto the track in 71st place.

The afternoon went much better and the team completed the race in 39th position in the C90 class and 58th position overall, completing 183 laps with a best lap time of 1:44.19 racing for 7:22.33. (This was after the second bike retired due to a gearbox failure)

The event enjoyed another excellent turnout. PTSG is yet to find out how much the race generated for charity but is delighted to have made a contribution.