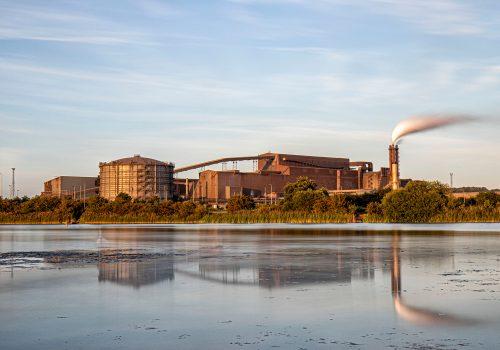 Premier Technical Services Group Ltd (PTSG) is currently engaged in a major specialist services project at the site of British Steel in Scunthorpe to repair a number of industrial chimneys.

Scunthorpe’s iron and steel industry has been a cornerstone of the area since the mid-19th century. In 1967 the works were consolidated and nationalised as part of the British Steel Corporation. In 1988 they were privatised and became part of Corus and later Tata Steel. Greybull Capital, a private investment firm that specialises in buying up struggling businesses, took over in 2016, renaming the firm British Steel.

The factory is a huge complex on the outskirts of the town centre and its towering chimneys can be seen for miles. Its presence is embedded into the fabric of the town – the central shopping arcade is named The Foundry in homage to it.

Steeplejack engineers from PTSG Building Access Specialists Ltd are currently onsite during a two-week shutdown, enabling them to perform a series of repairs to five different chimneys. They are:

With the steel industry being the lifeblood of Scunthorpe, if a single chimney at the plant fails, production has to cease and the repercussions can be significant. PTSG is therefore proud to play its part in helping to keep the site safe and operational.