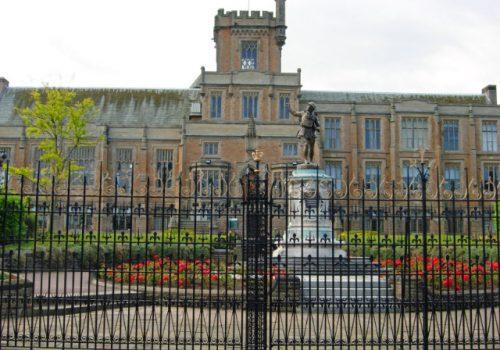 Engineers from PTSG Electrical Services Ltd are on site using a familiar technique whereby a flagpole is installed to disguise the lightning protection system. This is due to the historic nature of the building and the need for its aesthetic properties to be preserved.

Nottingham High School is an independent, fee-paying day school for boys and girls in Nottingham, England, with an Infant and Junior School and Senior School. There were 738 students in the 2019–2020 academic year. An example of Gothic Revival architecture, the original school building on the present site, built between 1866 and 1867, was designed by Thomas Simpson.

PTSG is the UK’s leading provider of lightning protection services. Its engineers are highly experienced in the sympathetic treatment of historic buildings, having worked on a number of significant National Trust structures. Falkland Palace in Scotland is one such site consisting of a church, which is still in use, and an adjacent room. This site was used as one of the filming locations for the 2008 film Outlander. When PTSG’s engineers installed the earthing connections to ground, an archaeologist was on stand-by in case any significant artefacts were unearthed.