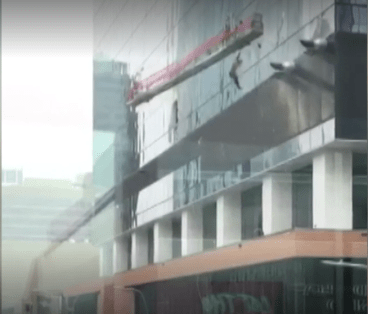 A high-level cleaning project which went spectacularly wrong at the Stantec Tower in Edmonton, Canada, has highlighted the extreme dangers of working at height – and the vital need for an uncompromising approach to safety.
A maintenance platform became unstable in high winds on Friday 25th October causing it to crash into the building, putting lives at risk.

A window cleaner fell from the scaffolding and was left dangling by his fingertips 50ft above the busy street below, as his harness kept him from falling. He was eventually rescued by firefighters, who used a bucket truck to return
him safely to the ground.

It appears that high winds were the reason for the accident, and there were no measures in place to ensure operatives could abort their work and safely return to ground level.

Premier Technical Services Group Ltd (PTSG) works on a great many high-rise buildings, often using suspended access platforms such as the one used in the incident in Canada. PTSG has always followed the rule “If it can’t be done safely, we don’t do it”. While it isn’t fully clear how the maintenance platform at the Stantec Tower became unstable, a risk assessment on the day of the incident may have ruled that conditions were too dangerous for work to be undertaken.

On 6th June 2019, PTSG was awarded an eighth consecutive RoSPA Gold in recognition of its practices and achievements in helping engineers and operatives to get home safely at the end of the working day. Also in 2019, the Group received an International Safety Award with Distinction from the British Safety Council.