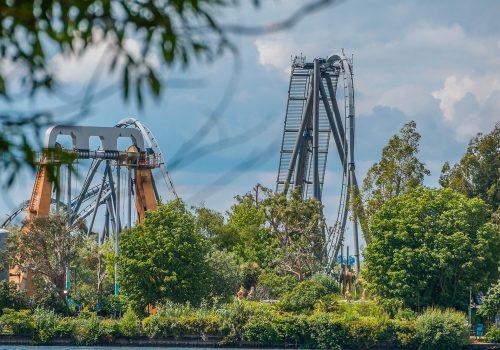 Thorpe Park Resort's Rush and The Swarm peeking from behind a tree!

Thorpe Park Resort, commonly known as Thorpe Park, is an amusement park located in the village of Thorpe between the towns of Chertsey and Staines-upon-Thames. Billed as the UK’s most thrilling theme park, it features Stealth – the UK’s fastest rollercoaster.

The park holds a number of other records:

• Nemesis Inferno is the first inverted coaster to feature interlocking corkscrews.
• The Swarm opened as Europe’s tallest Wing coaster.
• SAW – The Ride has the steepest drop not controlled by brakes and was marketed as the world’s first horror movie themed roller coaster.
• Colossus held the world record for the most inversions on a rollercoaster on opening in 2002 with 10 inversions, before being beaten by The Smiler at Alton Towers resort with 14 inversions.

Engineers from PTSG Electrical Services Ltd are currently on site to carry out specialist testing to the park’s lightning protection system. This will highlight any remedial works that may be needed, which PTSG is fully equipped to carry out and ensure Thorpe Park continues to meet the requirements of BS EN 62305.