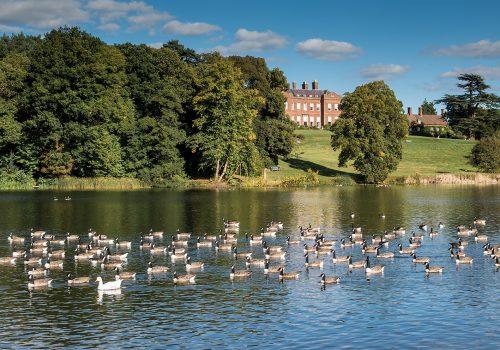 Premier Technical Services Group Ltd (PTSG) is on site at 17th century Dudmaston Hall, where its engineers are carrying out a series of specialists electrical repairs.

The traditional Shropshire country estate is in the care of the National Trust in the Severn Valley. The Dudmaston estate has been in the Wolryche family or the barely related Wolryche-Whitmore family since 1403, when William Wolryche of nearby Much Wenlock acquired it by marriage to the heiress of the former owners, Margaret de Dudmaston. It is likely that the medieval house was replaced by a structure on the site of the present building in the 16th century.

PTSG Electrical Services Ltd is currently on site to deliver remedial repairs to the lightning protection system in place at the estate. This will ensure it continues to comply with British Standards and safeguard the structure and residents in the event of an electrical storm.

PTSG has performed specialist services for a large number of National Trust assets. In 2018, PTSG’s engineers designed and installed a lightning protection at Berrington Hall in Hertfordshire. Working closely with the Hall’s estate management team, PTSG’s skilled engineers were able to meet the request of the client and provide a discrete and effective lightning protection system to the historic building.

Other National Trust sites where PTSG has delivered specialist services include Falkland Place in Scotland, which was used as one of the filming locations for the 2008 film Outlander; Staunton Harold Church in Ashby-de-la-Zouche; the Beatrix Potter Gallery, Dalton Castle and Wordsworth House and Garden in Cumbria.