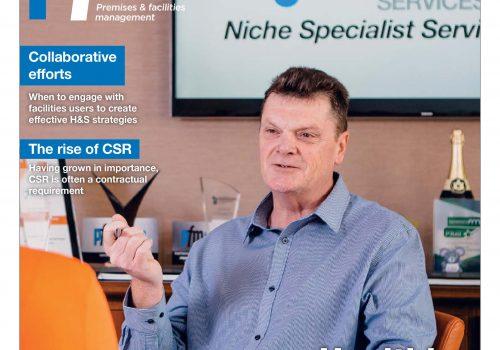 Premier Technical Services Group PLC (PTSG) has once again featured on the cover and inside pages of industry journal PFM (Premises & Facilities Management).

In April’s issue, the article is entitled ‘Tackling mental health and well-being head on’. Mental health can still something of a taboo subject for some people and organisations. In the UK, one in six adults experience a common mental health problem but very few seek help – either because they don’t feel there is suitable help available or because they are uncomfortable talking to others about it.

PTSG recognises the difficulties in tackling mental health problems and has put in place a number of measures to make things as easy and as helpful as possible for the Group’s 1,200 team members. An example of this is the production and distribution throughout the company’s rest areas and canteens of a series of one-page advice sheets on subjects such as panic attacks, relaxation and sleep. It’s a measure of their value that most are taken away, read and taken on board.

The company’s health and safety team regularly features in PFM Magazine as well as several other trade and association magazines due to its reputation for delivering a ‘best-in-class’ service. The business has an incredibly strong track record in close call reporting and AFR and RIDDOR management which has resulted in a number of high-profile industry awards. This year, the Group was awarded its eighth consecutive RoSPA Gold Award in recognition of its practices and achievements and supporting the organisation’s engineers and operatives to arrive home safely, every day. PTSG is also in amongst a very small group within the FM and construction sectors that have been awarded a RoSPA Gold Medal. In February, the niche specialist service provider also received an International Safety Award with Distinction from the British Safety Council (BSC). According to the BSC, only an elite number of organisations score over 48 out of 58 in its rigorous grading criteria.