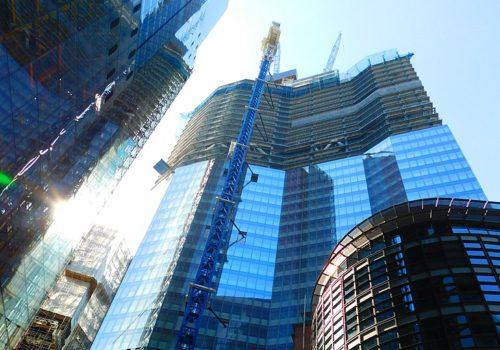 PTSG working on 22 Bishopsgate in London

Engineers from PTSG Access & Safety Ltd are on level 62, at the top of the high-rise structure where they are installing a mansafe system.

22 Bishopsgate replaces an earlier plan for a 288-metre tower named The Pinnacle, which was suspended following the recession of the late 2000s/early 2010s. The structure was later subjected to a re-design, out of which it became known by its postal address, 22 Bishopsgate. It is estimated the tower will provide approximately 120,000 square metres (1,291,700 square feet) of office space and 4,000 square metres (43,100 square feet) for restaurants, retail outlets and viewing galleries.

PTSG Ltd specialises in delivering numerous services for skyscrapers, the definition of which is a tall, continuously habitable building of over 40 floors, mostly designed for office, commercial and residential usage. While its four business divisions cover a diverse array of services, from fire and security solutions to lightning protection, what often unites them is the need to work at height. That’s why the Group’s engineers are routinely contracted to work on tall buildings, and have played a part in helping to shape London’s world-famous skyline.