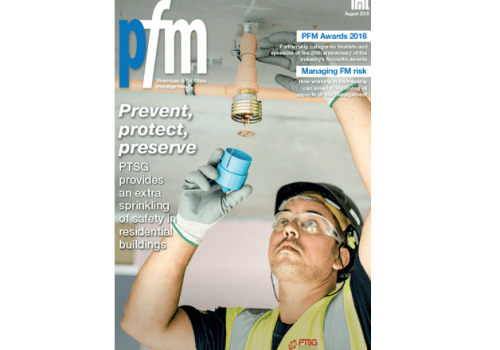 PTSG on the cover of this month’s PFM magazine

The story was published shortly after the anniversary of the Grenfell Tower disaster and leads on how a sprinkler system could have limited the damage to the building and the tragic loss of life that ensued. The article goes on to describe how PTSG’s specialist sprinkler engineers regularly carry out full hazard reviews to ensure that sites are safe and compliant, giving landlords peace of mind that, should the worst happen, their tenants are safe.

Fire suppression systems like those installed by PTSG are vital in large buildings such as Grenfell Tower, but can be just as valuable in smaller buildings too. There is still an alarming lack of awareness of fire safety and suppression, with less than a third of schools built since 2014 having a sprinkler system installed. PTSG offers a complete installation, inspection and maintenance service to ensure continued operation, compliance and most importantly the safety of building occupants in the event of a fire.