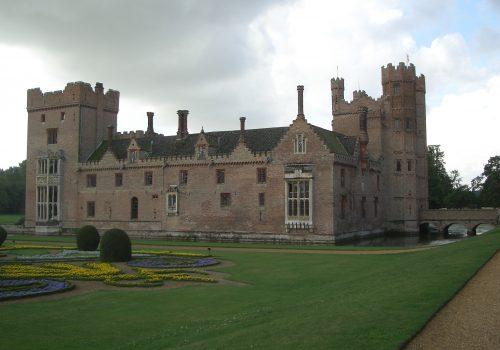 Oxburgh Hall is a moated country house in Oxborough, Norfolk. It was built for Sir Edmund Bedingfield in the late 15th century and the family has lived at the hall since its construction, although ownership passed to the National Trust for places of historic interest or natural beauty in 1952.

A £6million project is underway, which will see repairs carried out to the roof, windows, chimneys and medieval gatehouse façade, securing Oxburgh’s future. The 500-year-old building is surrounded by a moat, adding a significant challenge for workers. The ambitious conservation project will take until 2021 to complete.

The project came about after the unexpected collapse of a dormer window in 2016, which after further investigation, exposed a structural weakness to the roofline. Engineers from PTSG Electrical Services Ltd will be installing a new lightning protection system at the structure protecting it in the event of an electrical storm.

PTSG has worked on a number of buildings in the National Trust portfolio, delivering specialist services to ensure they are safe for future generations. One such site is Falklands Place in Scotland, which was used as one of the filming locations for the 2008 film Outlander. PTSG’s engineers upgraded the existing lightning protection system at the structure, going to great lengths to ensure all work blended seamlessly with the original historic stonework.