In summer 2021, PTSG completed a project to deliver specialist access services at Stenigot Tower in Lincolnshire.

Although it might look like an old electricity pylon, the mast here at Stenigot was a radar tower. The radar system warned Britain of impending attack from German aircraft.

The name ‘radar’ comes from the way the system worked – RAdio Detection And Ranging. Radio signals were sent out through masts like this one. The signals bounced off enemy aircraft in the air and the time the signals took to return revealed how far away the planes were.

While this mast transmitted radar signals, the low concrete structures visible beyond the modern buildings housed the radar equipment. There were separate buildings for the transmission and receiving apparatus.

But why is the mast located here?

Radar waves travel in straight lines, so they are limited by the natural curve of the Earth. As the Earth’s surface curves away from us, the signals go off into space. Setting a radar transmitter in a high location increases its range, allowing the waves to travel a little further around the Earth.

The hill here at Stenigot is one of the highest in Lincolnshire, so it was a perfect choice for the radar engineers. The 110-metre mast improved the range even further.

There was also another reason for locating it here: the Lincolnshire Wolds were strategically important. Lincolnshire was on the flight path of the enemy bombers heading for the industrial areas of South Yorkshire and the East Midlands, which produced ammunition, explosives and tanks for Britain’s war effort.

When German planes were detected, RAF fighters could immediately be sent to intercept them before they reached their targets. Stenigot formed part of a system of radar stations known as the Chain Home network that protected Britain’s coast.

Most RAF radar stations were dismantled after the war as they were no longer needed. Some of the masts were retained for civilian air traffic control.

Stenigot, however, was given a new lease of life. In the 1950s it became part of NATO’s cold war defence system. The mast was part of an early warning and surveillance network which passed military messages between allies from northern Norway to eastern Turkey.

IRATA Level 3 engineers from PTSG Building Access Specialists Ltd carried out vital repairs to the tower using rope access techniques. This is the most common method of accessing tall buildings in order to carry out specialist services, and is widely recognised as the safest and most effective.

Prior to works commencing, a full structural check was carried out of all access equipment installed to the tower by PTSG’s supervising rope access technician. Engineers then systematically removed, replaced or repaired the items identified as being unsafe. On completion of works, a report was produced detailing the services performed, with before and after photographs. 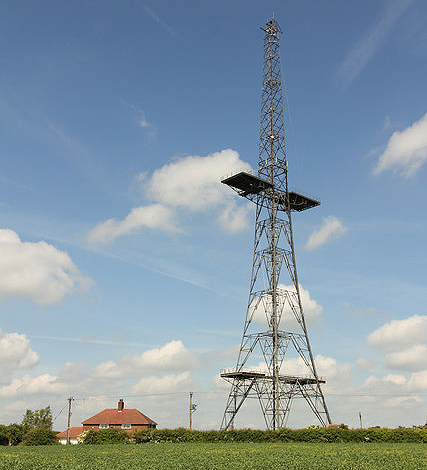