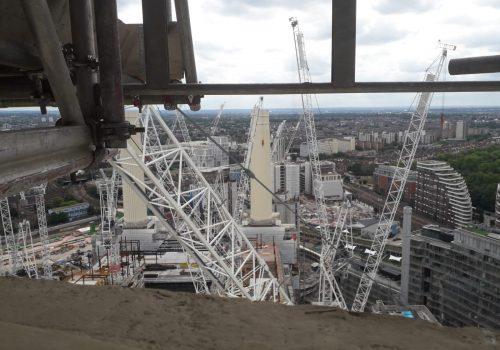 Premier Technical Services Group Ltd (PTSG) has reached a significant stage in the project to transform Battersea Power Station into a mixed-use neighbourhood.

Engineers from PTSG Electrical Services Ltd are currently working on the top of the north-west chimney, where they are working at height providing a new lightning protection system to the existing power station structure. The new system will keep building users protected in the event of a lightning strike.

Phase two of the installation sees engineers attend weekly meetings to ensure the client receives the highest levels of service expected from the Group.

The four chimneys are an integral part of the iconic structure in South-West London. They featured strongly in the opening and closing ceremonies of the 2012 London Olympics, have appeared in countless films and TV shows and they also dominated the famous cover of Pink Floyd’s 1977 album, Animals.

One of the industrial chimneys will house a glass elevator, travelling 109 metres to the very top, offering unrivalled views of the capital’s skyline. As well as the “great glass elevator”, two new event spaces in the development have been announced, which will be used for music gigs and conferences.