PTSG applies its knowledge at University of East Anglia 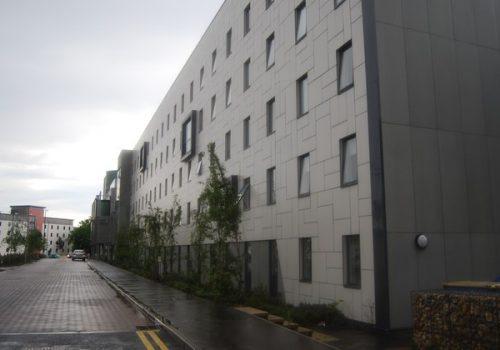 Established in 1963 in Norwich, UEA is a well-known public research university. In 2012, UEA was ranked the 10th best university in the world and the third best in the United Kingdom, offering over 300 courses in its four facilities.

Engineers visited the sites with the original intention of fixing the existing lightning protection system. However, upon arrival it was noted that the current system had broken down and was beyond repair. Due to the Grade II-listed status of these structures, lots of work had to be completed by all parties to ensure planning permission was granted by the client.

After numerous meetings with the project stakeholder, it was agreed that the best option would be to install early streamer emission (ESE) lightning protection systems, due to the nature and aesthetics of the building. Access machines, cranes and strict traffic management were needed to gain access to the upper roof areas in order to complete the installations within one week of starting the work.

Due to the vast experience of PTSG’s engineers, it is possible for the Group to make decisions of this nature and alter work in order to suit the client. PTSG has a lot of experience working for higher education institutions, including prestigious schools such as the London School of Economics and the University of Oxford.