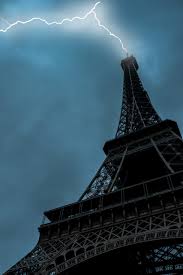 Lightning protection made the headlines this week as Paris’s most famous landmark, the Eiffel Tower, was struck by multiple bolts of lightning during a storm.

With such a high probability of lightning strikes and the associated dangers posed to the landmark’s millions of visitors every year, it is imperative that the tower is adequately protected.

Stories like this highlight how important effective lightning protection systems are, especially when the risks are so high. As the UK’s leading supplier of lightning protection services, PTSG Electrical Services Ltd (PTSG)’s teams are deployed all over the world to make sure that people can enjoy visiting large buildings and landmarks whatever the weather. Some of its high-profile contracts include the Queensferry Crossing, Westminster Abbey and George’s Dock.

The Queensferry Crossing project in particular demonstrates the hard work that goes into protecting such large structures. The team installed an enormous bespoke lightning protection and earthing system to the bridge, culminating in the largest single project of its type ever undertaken by the company.

The company’s impressive performance on this challenging contract led to it receiving the Partners in Expert Services (Single Site) award at the 2016 PFM Awards, recognising PTSG’s commitment to innovation and teamwork with the main contractor, SES Engineering Services.