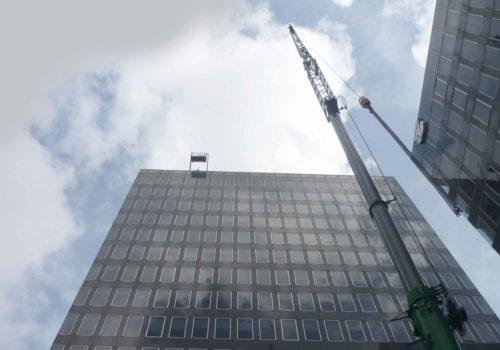 40 Melton Street, also known as Railtrack House, sits in a prime location adjacent to Euston Station in Central London. The 16-storey building was built in 1980, but substantially refurbished in 1993/4 when it was stripped back to its shell and core.

The exterior consists of a mixture of glazed and black granite cladding panels, these being maintained using the building’s dedicated BMU. This 30-year-old unit had reached the end of its design life and, as with most equipment of this age, the cost of the year-on-year maintenance was increasing with more and more parts requiring replacement due to wear and tear.

In 2009, the decision was made to replace the existing BMU, and National Cradle Maintenance – acquired by Premier Technical Services Group PLC (PTSG) in 2007 – was tasked with providing the new machine.

Part of the team’s remit was to assess the suitability of the existing track. To do this, a detailed survey and programme of testing was undertaken, which involved testing the thickness of the CHS track with ultrasound, MPI testing the track welds for cracks and testing the HD units for corrosion. On receipt of the positive track survey results, work on the design of the unit could begin and a detailed programme of works was agreed with the client.

One of the main obstacles to carrying out the work in such a busy location was finding a suitable position for the mobile crane used to remove old equipment and install the new access equipment.

The obvious solution was to position a smaller crane closer to the building on a nearby property owned by Network Rail, reducing the client’s costs and removing the need for disruptive road closures.

This, however, created its own sizable problem, as directly below the crane site sat Network Rail’s own underground car park, and the work area above ground provided a very limited area in which to work.

‘One of the main obstacles to carrying out the work in such a busy location was finding a suitable position for the mobile crane.’

Following detailed topographical and structural surveys, the final positions of the crane outriggers were determined, and the car park back propped using ‘super-props’ with a safe working load (SWL) of 12 tonnes.

The nearby Euston Station has very high foot fall during the week, and after carrying out a detailed risk assessment the decision was made to carry out the works over a weekend, when passing pedestrian and vehicular traffic was at its lowest. This reduced the potential risks to the public associated with these works significantly.

In March 2010, the old unit was removed and delivered to a recycling facility. The new unit was supplied by our partners GinD and successfully installed on the building. The unit was immediately tested and commissioned, and in April 2010 it was inspected by HSB Haughton and put into service with its first task: cleaning the windows.