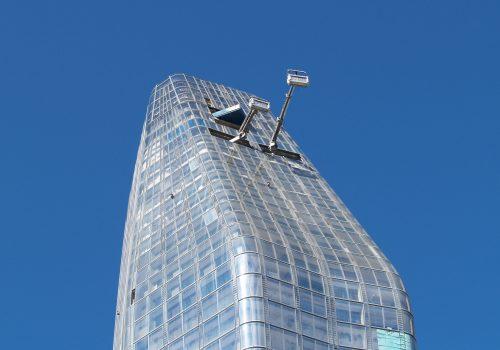 Integral Cradles provides permanent façade access equipment for new-build, refurbishment and ongoing maintenance projects. Its team of highly trained professionals has created bespoke solutions for some of the most significant buildings in London including the Leadenhall Building – otherwise known as the “Cheesegrater”, 30 St Mary’s Axe – also known as “The Gherkin”, and One Blackfriars Tower – known informally as “The Vase”.

Integral Cradles is part of Premier Technical Services Group PLC (PTSG), the UK’s leading provider of niche specialist services for buildings. Acquired by the Group in November 2015, it forms the installation arm of the Group’s Access and Safety division and continues to deliver bespoke access solutions across the UK, working for prestigious construction contractors on some of the UK’s most iconic buildings.

Originally founded in 2004, Integral Cradles’ team of professional engineers and designers have wide-ranging experience in designing and delivering advanced access equipment and systems. In that time the company has built valuable long-term partnerships with leading clients including CBRE, Skanska, JLL, BAM and Multiplex.

Equipped with the latest 3D solid modelling, CAD, and project management systems, the company’s technical project team takes an initial concept and turns it into a practical and efficient working system for accessing the most complex building facades. Utilising a trusted network of suppliers and manufacturers, the team’s designs are brought to life, meeting the quality and programme requirements of even the most complex and demanding sites.

Multiplex is a global construction company whose large-scale and complex structures help to shape the skyline in the UK, Australia, the Middle East, Canada and India. In the UK, it has created Wembley Stadium in London, Queen Elizabeth University Hospital and The Royal Hospital for Children in Glasgow.

Integral Cradles has long had a strong working relationship with Multiplex, having successfully collaborated on a large number of significant projects over the last few years. This success has largely been based on a shared commitment to excellence; adding value to projects with unrivalled levels of expertise, care and quality.

The result for both companies is the ability to deliver advanced and complex sites and systems for end clients, creating world-class structures for some of the world’s most respected companies and institutions.

‘Integral Cradles has long had a strong working relationship with Multiplex, having successfully collaborated on a large number of significant projects over the last few years.’

Solving the puzzle at Aykon Tower

Multiplex is currently constructing Aykon London One for DAMAC (Nine Elms Property Limited). This £240 million residential development situated in Nine Elms on the South Bank, is due to be completed in December 2020 and consists of a 50-storey North Tower and a 24-storey South Tower.

The North Tower features interiors by Versace Home and provides 450 residential units, five storeys of office space and a connecting sky bridge to the South Tower, which is topped by an extensive roof garden at level 23.

Nicknamed the “Jenga Tower” due to its unusual stepped design, Aykon London One presents a unique challenge in terms of creating an effective access system.

Integral Cradles has been contracted to provide a bespoke solution, having built up a strong reputation both for the quality of workmanship amongst its skilled practitioners and their creative approach to problem-solving – often delivering significant cost savings. The two companies are working together collaboratively and extremely effectively at the site in Nine Elms, demonstrating the highly successful partnership that exists between them.

When complete, Aykon London One will be another in a long line of prestigious buildings in Integral Cradles’ portfolio, situated in premium locations in the capital. Another such development is One Blackfriars Tower.

Innovation at One Blackfriars Tower

In the recently completed project at One Blackfriars Tower, Integral Cradles delivered a complex, multiple access solution. One Blackfriars Tower, known as The Vase due to its shape, is a mixed-use development in Bankside, London, which was completed in 2018. The already iconic building is made up of a 52-storey tower up to 170 metres in height and two smaller buildings of six and four storeys. It houses 247 luxury apartments and was inspired by a piece of 1950’s art: a Scandinavian glass vessel from the architect’s private collection.

Each skyscraper requires its own unique access system and The Vase is no exception. Integral Cradles installed three building maintenance units, which were fitted to integrate with the building’s moving doors – also designed and supplied by Integral Cradles, to carry the intricate cladding panels and mask the garage area. This allows the BMUs to be concealed without any visual sign of the systems.

Since 2015, Integral Cradles worked at the site in close collaboration with the client, WSP, and Multiplex, to deliver the finished building. This included sharing 3D models to determine how to prevent the main BMU, which was housed in the rooftop structure, from intruding on the penthouse space. The model allowed the team to fully understand the space and reduce the size of the BMU to a more compact unit.

‘London is a city famed for its eclecticism and both One Blackfriars and Aykon Tower join a long list of well-loved architecture across the capital.’

One Blackfriars tower has been described as a magnificent addition to the London skyline, creating a unique and luxurious base for its residents. Integral Cradles is proud of the part it has played in its creation, the value of which was maximised by the successful working relationship with all stakeholders.

London is a city famed for its eclecticism and both One Blackfriars and Aykon Tower have joined a long list of well-loved architecture across the capital. While their visionary blueprints are brought to life by Multiplex, Integral Cradles provides the practical access solutions that will allow these buildings to operate and stay well maintained in the future, providing a vital service that helps to make this exceptional architecture possible.