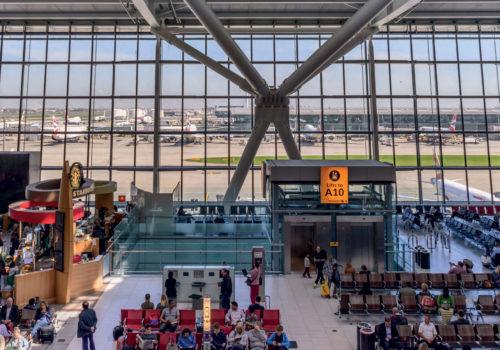 PTSG Fire Solutions Ltd has been providing safety systems at Heathrow Airport since 2011. Before that time no one was providing services in that area, so the Group has filled a considerable skills gap.

PTSG has extensive knowledge of fire, life safety and security systems and offers a full range of services for clients in a large number of industry sectors. Its Fire Solutions division, whose Heathrow office is headed up by Director Adam Davies, started from scratch, putting together and mobilising a team of over 50 people, from senior project managers to administrators, to deliver life safety systems that have transformed the airport’s operations in this area across Terminals 1, 2 and 3, Heathrow Express Rail Network, Airside and Landside Properties.

The team put forward a new change control process paper for fire and life safety systems, which was proposed, accepted and implemented, not just in fire safety but across a number of facilities management services. This saw the clearing of all legacy faults across Terminals 1 and 3. An investigation into why faults kept recurring found that the problem arose when other Fire and PAVA contractors worked on site. As a result, PTSG installed a process which meant that only the maintainer of the system could permit work at the terminals. This stopped faults from recurring. The process is still in use at Heathrow today.

Another initiative, which wasn’t a requirement of the contract, saw the team submit a dilapidation report to highlight any areas of the assets PTSG maintained that were faulty or had not been maintained satisfactorily prior to the contract. On the back of this, a risk register was created to highlight the risks outstanding in the system, so they could be added to Heathrow Airport’s own risk register, which is evaluated by the engineering committee every six months. This ultimately gave Heathrow a guide to where they needed to invest money in the coming years.

PTSG achieved the LPS1204 accreditation for fire suppression in 2015 following a number of tough audits by the Building Research Establishment (BRE). PTSG Fire Solutions Ltd is one of only eight accredited fire suppression companies in the UK and the business’s suppression times in the last 18 months have continued to grow very strong. Its engineers were each awarded a diploma from BAFE and PTSG achieved the full BAFE accreditation after a rigorous audit by BAFE themselves.

‘PTSG has maintained the Life Safety Systems at Heathrow Airport since 2011 and in this time its reputation has strengthened year on year.’

PTSG has won a subsequent maintenance contract for seven years, plus a major project with MACE to replace the Terminal 3 Fire and PAVA system. Another notable achievement by the PTSG team during the Heathrow contract has been the development of an environmental strategy for the business. PTSG now uses an electric vehicle at Heathrow airport, hybrid vehicles throughout its fleet and Euro 6 engine vehicles.

“PTSG has maintained the Life Safety Systems at Heathrow Airport since 2011 and in this time its reputation has strengthened year on year. From management through to the engineering team, PTSG’s main focus has always been impeccable customer care and technical expertise. They have worked with Heathrow Airport Limited in a collaborative manner since the contract began, which has brought many opportunities to light and helped to mitigate any risks that arise in a live airport environment.” Alan Russell – Head of Facilities Management, Heathrow Airport