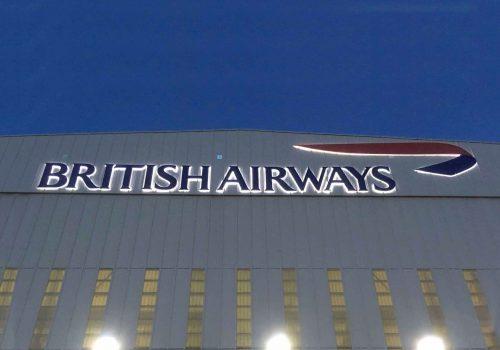 Using parts manufactured by a third party PTSG’s dedicated steeplejack company, Pendrich, designed, built, installed and wired up the signage on site. This job was carried out using one of the largest Mobile Elevating Work Platforms (MEWPs) in the UK.

‘Working at height is one of the most dangerous activities carried out by PTSG’s engineers.’

British Airways, part of International Airlines Group, is one of the world’s leading premium airlines and the largest international carrier in the UK. The airline is due to celebrate its 100th anniversary on 25th August 2019.

Working at height is one of the most dangerous activities carried out by PTSG’s engineers, and it is common for the team to face multiple challenges when carrying out high-level installation work.

Weather conditions can often be a hindrance and can greatly increase risk. However, engineers carefully planned work to take account of high winds, carrying out the work successfully and safely.

Secondly, PTSG’s engineers had to replace an older British Airways sign installed in the 1990s. Matching the existing fixings of the current BA signage required extra consideration throughout the design and installation process.

Finally, safely guiding the newly manufactured letters to their installation points, which was approximately 30m from ground level, proved difficult. Each letter was 2.4m in height and the complete sign was just under 14m in width.

‘CBRE and British Airways were both delighted with the results from the high-level signage installation.’

As part of the new signage engineers installed a halo feature illuminating the sign from the rear, so that it is visible passengers travelling at night as well as during the day. The halo feature on the Terminal 5 signage is the first introduced to any BA site in the UK.

Once PTSG’s work was complete a structural engineer from PHS visited the site and was extremely satisfied with the work, which was signed off successfully.

As the work on Terminal 5 came to a close, an electrician connected the newly fitted LED light sign and installed a timer and a dimmer to the internal and external parts of the sign, respectively.

CBRE and British Airways were both delighted with the results from the high-level signage installation. Passengers flying in and out of the bustling airport are now able to clearly see the new signage applied to the façade of the Terminal 5 building.